Just as educating children benefits the entire society, keeping them healthy and restoring them to health when they are sick is important for all of us. Perhaps that is why expanding Medicare to children is so popular.

A Data for Progress poll conducted in April found that an overwhelming sixty percent favor “extending universal health care to all American children by giving all Americans under the age of 26 coverage in a government health plan modeled off of Medicare, known as ‘Medicare for Kids.’” That percentage jumps to 71 percent among those under age 45 and an even more overwhelming 82 percent of Democrats.

Here are the results: 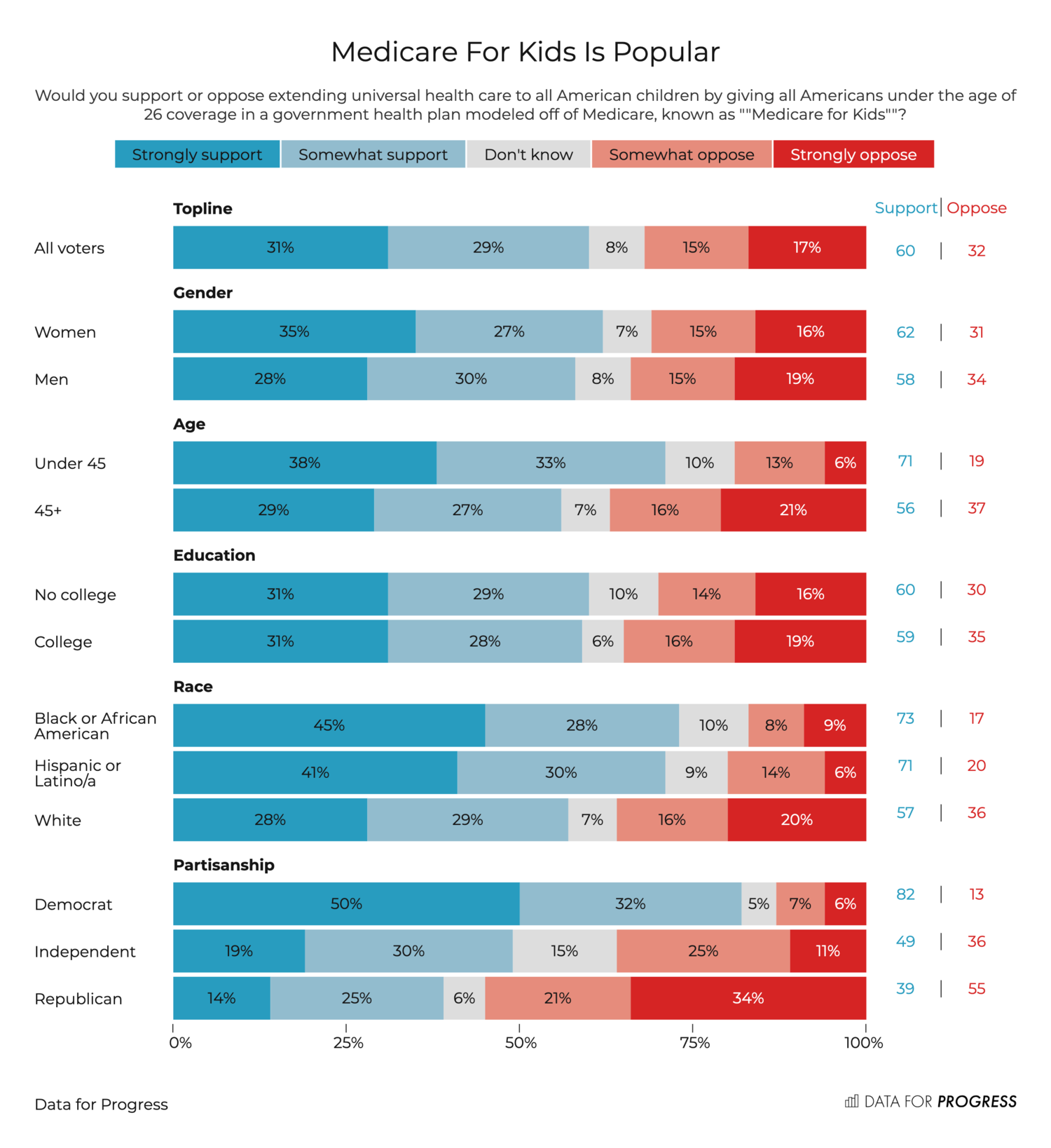 The reason for the overwhelming popularity is obvious. Universal national health insurance for children is not only morally right; it is also a profoundly wise policy. Children, on average, have the lowest health care costs. Spending that small amount to invest in that care buys a lifetime of health. Shockingly, at the moment, the nation is moving in the opposite direction. Increasing numbers of children have joined the ranks of the uninsured.  Medicare for Kids would reverse that trend overnight.

Medicare for Kids is also winning politics. In an April piece for the American Prospect, Joel Dodge highlighted the Data for Progress polling results and laid out the case for why presumptive Democratic presidential nominee Joe Biden should propose Medicare for Kids.  Dodge makes a compelling case that Biden’s embrace of the idea is an excellent way to win over Bernie Sanders’s supporters.

As Dodge points out, support for the idea is not new. Rather, it has been impressively durable over time. Data for Progress has tested the issue before. Like the new polling which found that the proposal has a 28 percentage-point margin of support, a similar poll Data for Progress conducted a year ago, in May 2019, found that the proposal enjoyed a 27-percentage-point margin of support.

But the idea goes back much further than that. When President Franklin Roosevelt created Social Security, he explored proposing universal, government-provided health insurance, but decided to wait until Social Security was enacted and implemented. By then, though, the nation’s attention necessarily shifted to fighting World War II. His successor, Harry S. Truman, championed universal health insurance but was blocked by Republicans.

President Lyndon Johnson, legislative genius that he was, decided to use an incremental approach. He and his advisors debated whether to start with retirees, a population desperately in need of health insurance, or children, who would be less expensive and for whom early intervention could mean a lifetime of good health. They decided to begin with older adults because the need was so great.

In any event, Johnson successfully shepherded Medicare through Congress, and it joined Social Security in establishing the foundation of economic security for seniors. The plan was that Medicare would quickly be followed by a Kiddicare or Medikids program covering our nation’s children, and other expansions, with the ultimate goal of Medicare for All.

But then the nation took a detour. Though President Richard Nixon expanded Medicare to cover people with disabilities, conservative forces, which preferred private-sector solutions and expansion of means-tested Medicaid, prevailed.  Republican President Ronald Reagan famously asserted “Government is the problem,” and Democratic President Bill Clinton, “The era of big government is over.”

Thanks to Senator Bernie Sanders, who transformed the conversation with his run for president in 2016 and 2020, the Data for Progress polling suggests that the nation is now back on track.  The coronavirus pandemic, which is shining a bright spotlight on the nation’s dysfunctional health care system and the wisdom of expanding an improved Medicare system beyond seniors and people with disabilities, is adding momentum to the movement.  More than a half-century after advocates decided to make Medicare for Kids a second step, following Medicare for seniors and people with disabilities, it finally will happen. It will, that is, if Biden and others mobilize the vast number of supporters that Data for Progress shows us are out there.

Alessandra Malito reports for MarketWatch that people receiving Social Security benefits might not see an increase in their checks in...